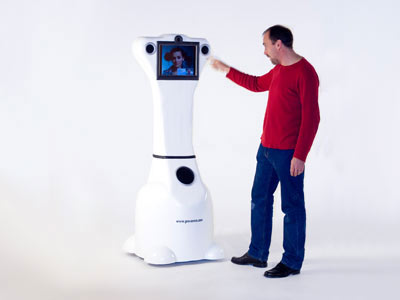 ART – I have been exhibiting my robotic artwork internationally since 1986 when I took part in the “Strategic Arts Initiative” exhibition that linked Canada and Italy in the world’s first telepresence robotics exhibition. From 1993 to 1995 I directed the VRAAP program (Virtual Reality Artist Access Program) at the McLuhan Program in Culture and Technology at the University of Toronto where I explored the effects virtual technologies have on society. In 2001 I was one of 10 artists involved in the ground breaking “Liveform Telekinetics” project that linked Interaccess in Toronto to the WAAG new media center in Amsterdam with videoconferencing media. In 2007 I exhibited “MOBI” and “Morphing Machinery” at the DEAF festival in Rotterdam and in 2009 completed the “Emoti-Chair”, a 3 year Canada Council /NSERC research project with Ryerson University to develop a way to simulate the affect of sound in movies for deaf people using a combination of non audio sensory inputs. In 2010 I exhibited “Intersection” at Transmediale in Berlin, “3rd i” for the Dutch cultural pavilion at Expo in Shanghai, “Third Eye” for the European Capital of Culture that took place in Essen, Germany and OVERVIEW for the European Space Agency. In 2011 I exhibited the telepresence art piece “Displaced Perspectives 2.0” at the second Strategic Arts Initiative 2.0 exhibition that linked V2 in Rotterdam with Interaccess in Toronto as part of the McLuhan 100 festival. In 2014 I exhibited the robotic work “MOBI Jr.” in Sandnes Norway and my first outdoor kinetic sculpture “Undulations” in the Delft Sculpture Park in the Netherlands. In 2015 the Vitenfabrikken Science Centre in Norway installed my first permanent robotic installation called “Fronken Mobi”.

SCIENCE – As a scientific researcher I have been involved in numerous research projects , been granted 6 patents and as an entrepreneur have started 3 companies in the areas of virtual reality, robotics and social entrepreneurship. I started my first company called Horizonscan in 1987 to commercialize my Virtual Reality inventions and in 1996 formed Telbotics to introduce the telepresence system called PEBBLES (Providing Education By Bringing Learning Environments to Students) that is currently installed in over 50 hospitals and schools in Canada and the US. In 2007 I started my 3rd company called Webchair www.webchair.com in which I serve as Chief Science Officer which has deployed over 300 units that link children recovering from cancer to their learning environments in the Netherlands, Belgium, France and Germany. My current research focus is my PHD on a project called Webmoti with Ryserson University in Toronto, Canada that is researching the positive impact telepresence technology may have on people with autism to help mature a young autistic persons sensory system.