INTERSECTIONS is an interactive video installation that documents the transformation areas around the former Berlin Wall have gone through from 1988 – 2009 – 2017. It is an interactive video installation that morphs between time periods depending on the motion and location of the audience. The 3.6 meter high by 80 meter long piece uses cameras and computer software to track the location of people in front of the piece to allow the audience the ability to shift the images shown on the 14 video projectors accordingly. The original 675 image cubist panoramas that form the image set were shot before the wall came down in 1988 using a unique 5 Polaroid camera system of my own invention that created panoramic imagery. The 2nd set of images were shot in 2009 using the same panoramic camera rig as used in 1988 but with 5 digital cameras and re-photographed exactly the same locations. The final set of images will be shot in 2017 and will be used as the 3rd set of images for an exhibition in 2019 to celebrate the 30 year anniversary of the fall of the wall and the transformation of Berlin.

The piece is designed to convey a rich, complex impression of the enormous physical and geopolitical transformations the area around the wall has under gone over the last 20 years by allowing people the ability to literally “walk in and out of time”. By giving viewers the ability to explore history with their bodies as well as their eyes the piece aims to create an image that becomes alive, reacting to the movement of the viewers to project a sense of the multifaceted history the area holds. Just as history is constantly in motion by being re-evaluated by each new generation, INTERSECTIONS takes the static images from the past and transforms them into a constantly morphing vista of the present. 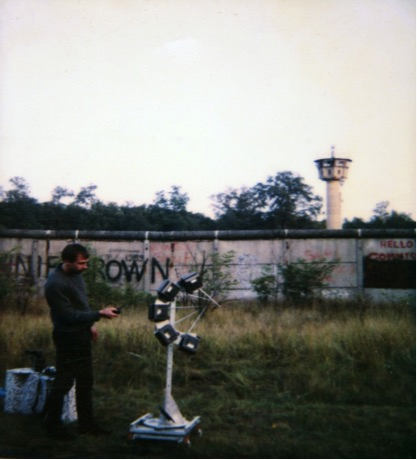 1) 1988 Polaroids – The 1st set of images are 600 separate images that make up 3 panoramic murals that I shot of the Berlin Wall area in 1988 with 5 Polaroid cameras and a custom dolly. The cameras recorded 360 degree scans of the environment as it was moved forward in space and a clock was mounted on dolly to record the passage of time.

“Checkpoint” – 150 images total – 30 images long – 2.5 panoramic scans
The “Checkpoint” image was shot at Checkpoint Charlie, the symbolic Cold War focal point and was still extremely dangerous in 1988. The East German boarder guards were very unhappy with my project and not only tried there best to stay out of my photograph (unsuccessfully) but did try and arrest me numerous times as I crossed the white line that marked the exact boarder and forced them to cross the cameras field of view and become part of the image.

“Door – 300 images total – 60 images long – 5 panoramic scans
The “Door” image is the longest and most complex of the images as it takes in 6 complete panoramic scans in 1 long continuous movement that involved the shooting of 300 Polaroid images in sequence. The image moves 6 meters from inside a hallway beside a beautiful old door across a street to cm’s from the Berlin Wall.

“Bridge” – 150 images total – 30 images long – 2.5 panoramic scans
The “Bridge” image is similar in nature to the “Door” image as it involves not only a series of 360 degree scans of the environment but also a simultaneous linear dolly move. The image was shot on a railway bridge that became useless after the wall was erected and is now part of the S Bahn commuter rail system close to the Kolln Heide station.

2) 2009 Digital images – With help of a Canada Council, Media Arts grant I traveled back to Berlin in the fall of 2009 and reshot the Check point Charlie images from exactly the same positions and angles using an adaptation of the original camera rig that I adapted to fit digital cameras. These contemporary high resolution images were morphed with the original 1988 images and displayed at Transmediale in Berlin in 2010 and allowed the audience the ability to interact with the landscape by using their body as input devices so they could move through time and space to reveal the dramatically changed in which the wall is gone and the city has been transformed by 20 years of peace.
https://transmediale.de/content/graham-smith

3) Berlin Wall – Remaining parts of the Berlin Wall using a digital SLR camera and will create a composite image of the structure in Photoshop. This image was displayed when people are close to the projection and is a very realistic recreation due to the fact that the wall is essentially a 2 dimensional concrete surface that can be projected very realistically in this way.

4) 2017/18 Digital Images – A final set of images will be shot in 2017/18 that will form the basis of an exhibition in 2019 to celebrate the 30 year anniversary of the fall of the wall and the transformation of the “death strip” to its current manifestation as an example of modern urban renewal.