Übergang was first presented at ThoughtWorks in Berlin, November 2019.
Announcements: Art in Berlin (in German), ThoughtWorks

Time is measured not only in segments called seconds, minutes, hours, days and years but also in 30 year long periods called generations which relate to human maturation from vulnerable newborn to independent adult. In many ways this cycle forms the basis of human interpersonal interaction as it bonds people within a delineated population who have experienced the same significant events within a given period of time. “Übergang” is an interactive video/photo based artwork that explores this generational interconnection of time and space as it relates to the fracturing of Germany by the construction of the Berlin Wall in 1963 and the nations eventual reintegration after 1989 when the barrier was demolished. The work focuses on both the global experience of the passage of “meta time” as defined by 30 year generational periods as well as the more immediate, personal movement of the physical body through space that defines the human experience of time “real space”. “Übergang” is designed to convey a rich, complex impression of the enormous physical and geopolitical transformations the area around the wall has under gone and is going through, allowing people the ability to literally walk in and out of time periods by using their body as an input device. The piece aims to create an exhibition environment that is alive for viewers, reacting to the movement of the people exploring it, taking the static images from the past and transforming them into a complex vista of the currently unnamed era that is still being defined.

Übergang is made up of 3 interrelated components…

Übergang #1– An interactive video installation that is projected onto 2 opposing walls that are 2.5m high and 3.6m wide to allow people the ability to alter both the physical movement of the camera perspective as well as the time period they are viewing. It is like an interactive time portal that allows for the exploration of the area around “Checkpoint Charlie” between the times 1988 and 2019 using a combination of original panoramic imagery shot meters from the exhibition space, life sized photos of the actual Berlin Wall. The work allows viewers the ability to interactively move their perspective forwards or backwards in both time and space using a simple to use “step pad” user interface that is both intuitive to use as well as wheelchair friendly so that everyone who visits the exhibition can interact with the piece no matter their age or physical challenge.

Übergang #2 – An interactive photograph that is 1m high by 3.6m long image that displays dual perspectives shot in the years 1988-2009 at Check Point Charlie. It uses the “Tabula Scalata” faceted image technique in which 2 photographs are displayed simultaneously in vertical wedge shaped triangular sections that allows viewers the ability to shift their visual perspective from one time period to the next as they move back and forth along the image. It is a simple yet effective way to display 2 time periods at the same time that uses an ancient imaging technique to bring to life the transformation the area only 30 meters away has undergone since the fall of the wall.

Übergang #3 – A central sculptural element of the work is the panoramic machine invented by the artist to shoot the work in both 1988 and 2019 which uses 5 Polaroid cameras on a rotating, wheeled base that has a clock attached to record the passage of time. This portion of the display anchors the work to its origins when the original imagery was shot just meters from the exhibition space at Thought Works and adds a physical 3 dimensional quality which references back to the origins of the work itself. It will feature the 5 Polaroid cameras which were used to shoot the original work in 1988 and offers a historical facet to the work, functioning as both iconic design element and imaging tool. 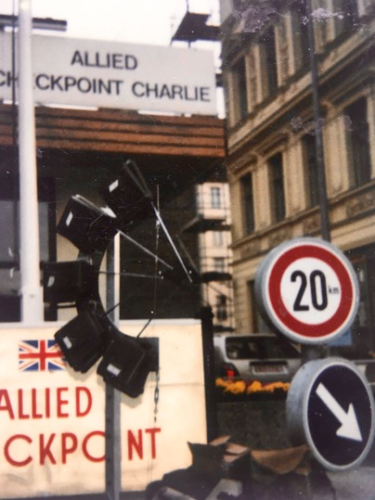 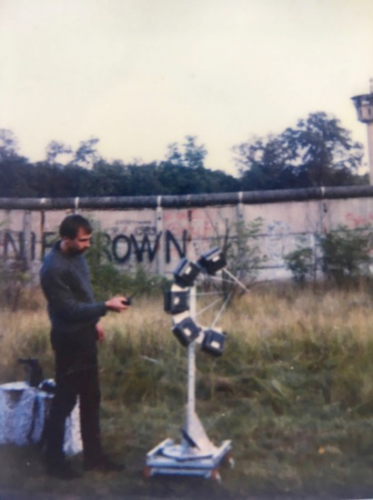 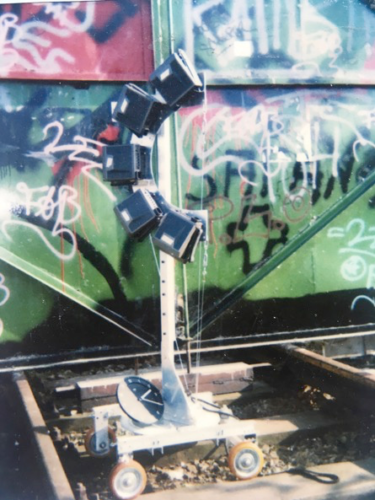 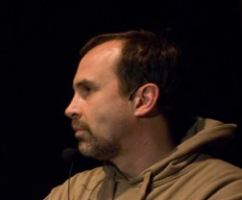 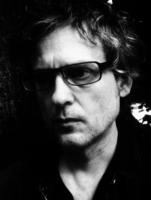 Jeff Mann is a media artist responsible for interaction and interface design, software development, and electronics for the installation; and

Joshua Tzventarny is a co-artist who has been involved in the development of Übergang #2.