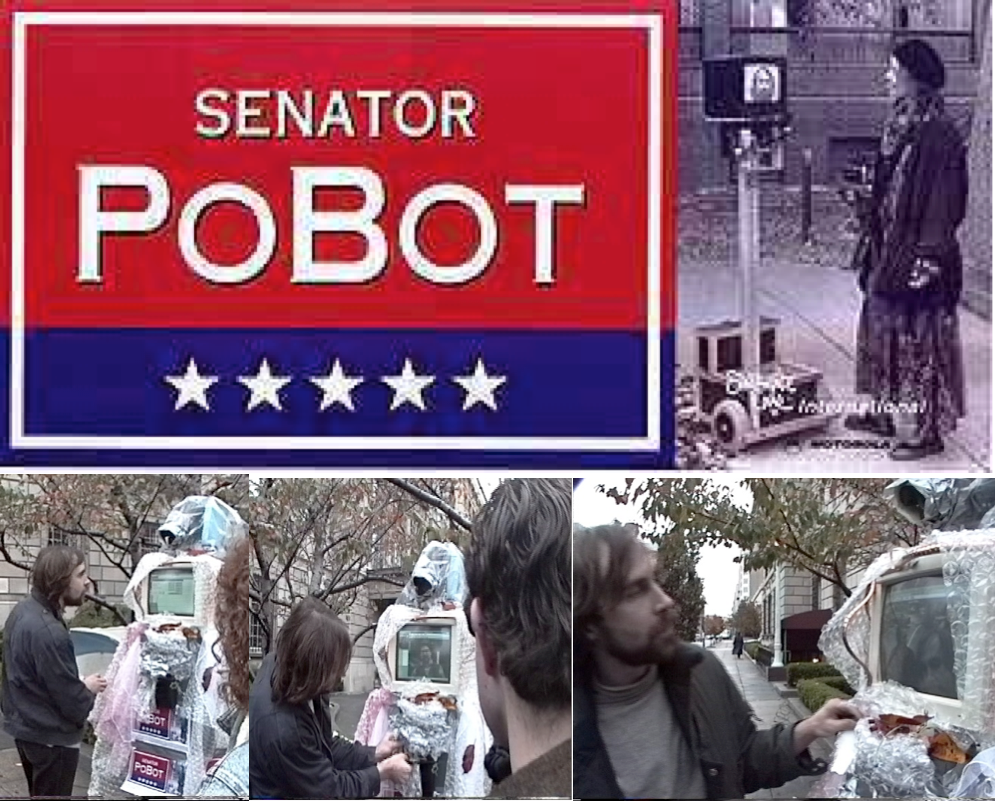 A project done in collaboration with the Electronic Café in Los Angles that linked a series of musicians and poets located at COMDEX in Las Vegas to the telepresence robot Wilma who performed in fro=nt of the White House in Washington. 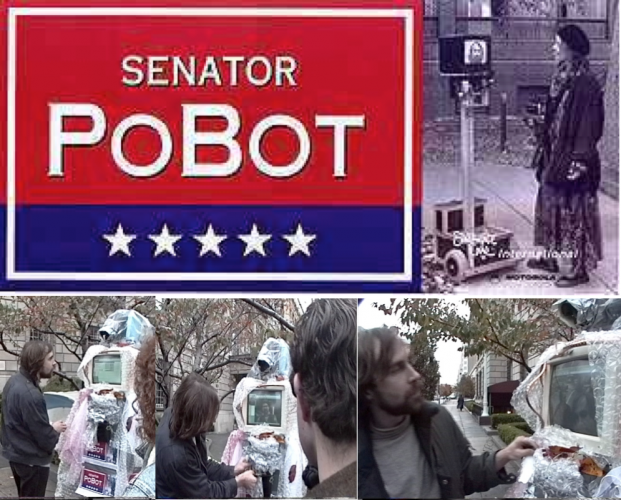 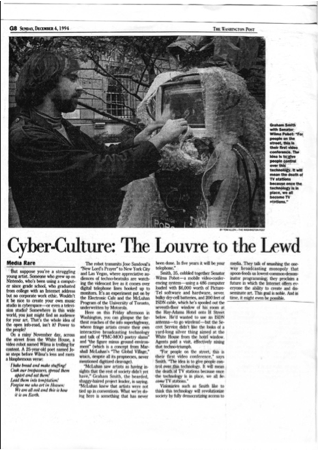 MEDIA RARE– But suppose you’re a struggling young artist. Someone who grew up on Nintendo Co. who’s been using computers since grade school call who graduated from college with an Internet address but no corporate work ethic. Wouldn’t it be nice to create your own music studio in cyberspace — or even a television studio? Some were no wide world, you just might find an audience for your art that’s the whole idea of the open info — road, isn’t it? Power to the people?

On our rainy November day, across the street from the White House, a video robot named Wilma is trolling for content. A 25-year-old poet named Josie steps before Wilma’s lens and rants blasphemous verse:

I bake bread and make stuffing!
Cook our trespassers, spread them apart and eat them!

Leads him into temptation!
Forgive me who art is in heaven:

We are all evil and this is how it is on Earth.

The robot transmits Jose Sandoval’s “New Lord’s prayer” to New York City and Las Vegas, where appreciate the truth audiences of techno — beatniks or watching the videocast live as it comes over digital telephone lines hooked up to monitors. It’s an experiment put on by the electronic Café in the McLuhan program of the University of Toronto underwritten by Motorola.

Here on Friday afternoon in Washington, you can glimpse the farthest reaches of the info superhighway, where fringe artists create their own interactive broadcasting technology and talk of quotation marks “PMC — MOO poetry slams” and the figure minus ground environment (which is a concept from Marshall McLuhan’s the global village which despite all its prophecies never mentioned digital cleavage)

“McLuhan saw artists as having and insights that the rest of society didn’t yet have,” Graham Smith, the bearded, shaky — haired project leader, is saying. “McLuhan knew that artists were not tied up in conversations what were doing here is something that has never been done in five years it will be your telephone.”

Smith, 35, cobbled together Sen. or Willem Wilma pobot — a mobile videoconferencing system — using a 486 computer loaded with $6000 worth of picture tells software and hardware, servers both feet dry cell batteries and 200 feet of ISDN cable which he spooled out of 7th floor window of his room at the Hay-Adams Hotel on the H St. below. He’d wanted to use the ISBN antenna — go wireless — but the Secret Service didn’t like the looks of a yard long silvery thing aimed at the White House from the hotel window. Agents paid a visit, effectively mixing that techno — trial

“For people on the street, this is their first video conference, says Smith. The idea is to give people control over this technology. It will mean the death of the TV stations because once the technology is in place we all become TV stations.”

Visionaries such as Smith like to think this technology will revolutionize society by fully democratic sizing access to media. The talk of smashing the one-way broadcasting monopoly that spoon feeds asked lowest common denominator programming they proclaim a future in which Internet offers everyone the ability to create and disseminate art. This goal is noble. And in time it might even be possible.