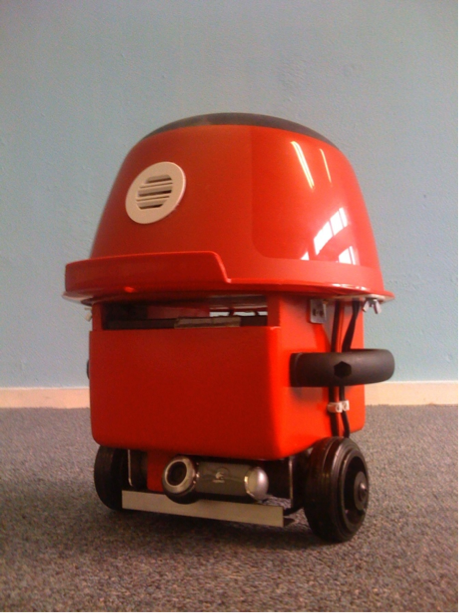 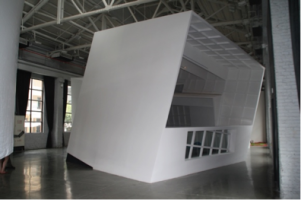 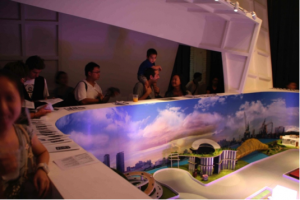 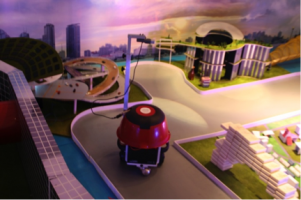 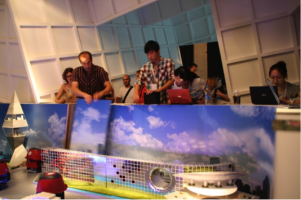 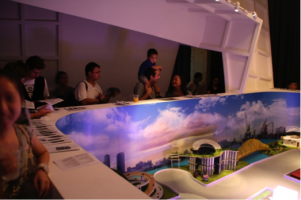 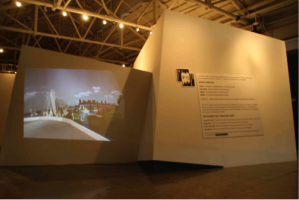 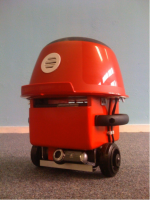 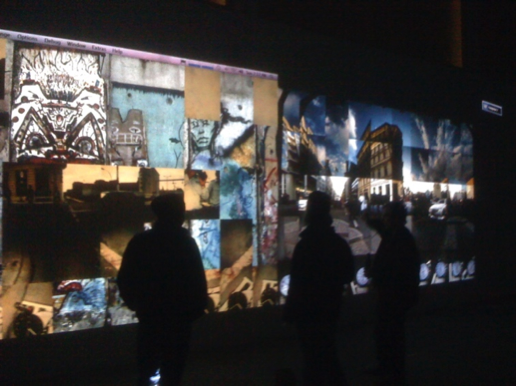 INTERSECTION is a work exploring the history of the Berlin Wall and is comprised of an interactive video installation that morphs between a set of a panoramic murals shot at the same Berlin Wall site between the years 1988 to 2009. The 3.6 meter high by 15 meter long piece uses beamers, cameras and computer software to track the location of people in front of the piece which is designed to convey a rich, complex impression of the enormous physical and geopolitical transformations the area around the wall has under gone over the last 20 years by allowing people the ability to literally “walk in and out of time”. By giving viewers the ability to explore history with their bodies as well as their eyes the piece aims to create an image that becomes alive, reacting to the movement of the viewers to project a sense of the multifaceted history the area holds. The Intersection exhibition was funded through a Media Arts grant from the Canada Council of the Arts. 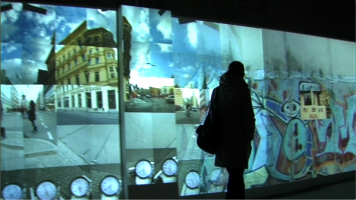 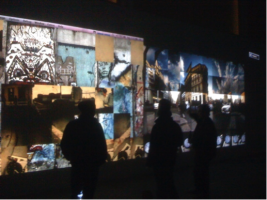 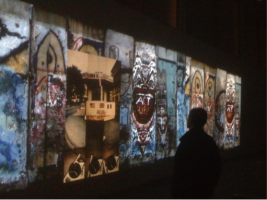 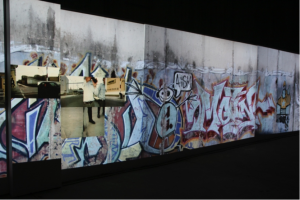 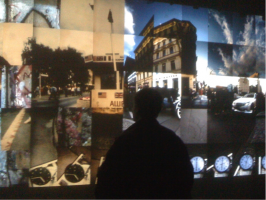 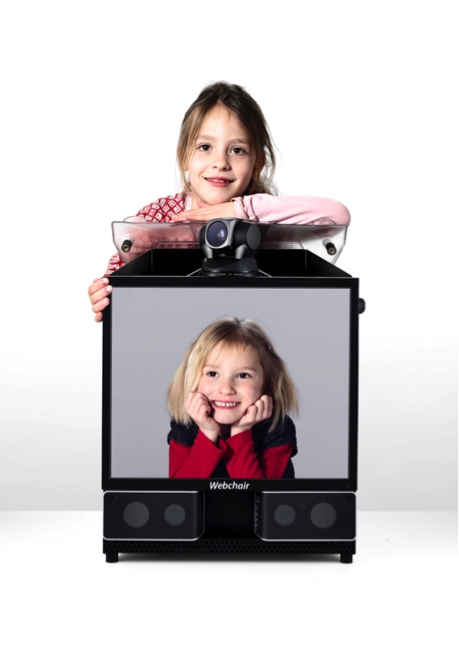 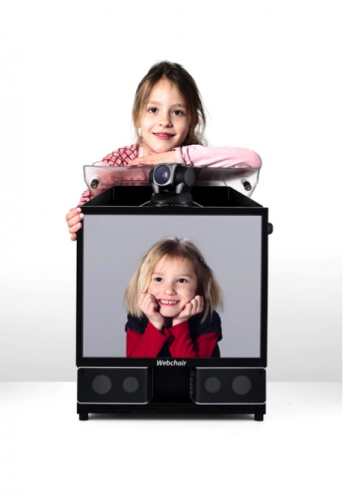 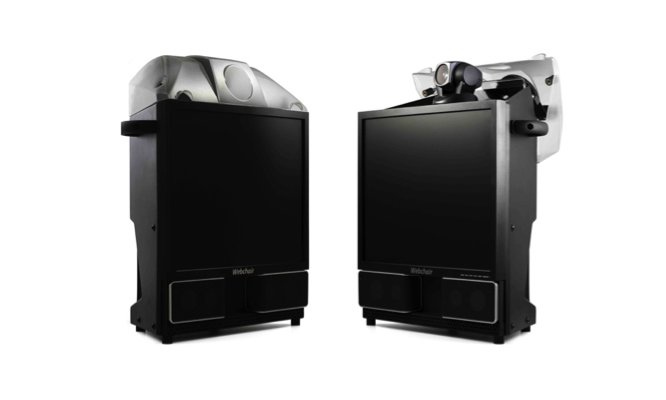 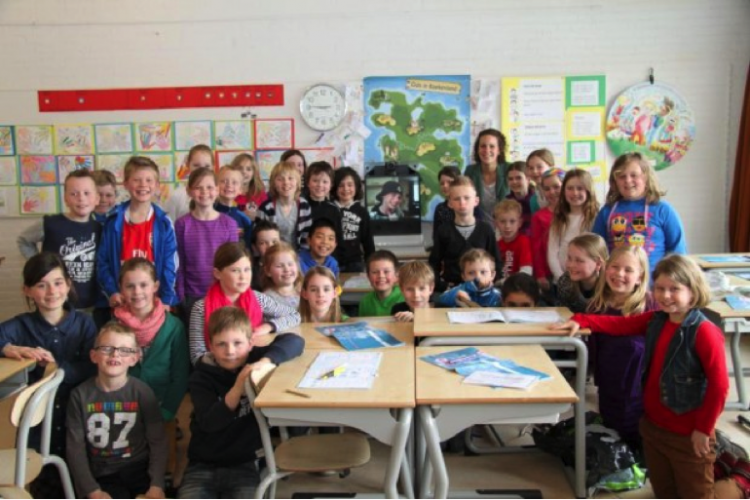 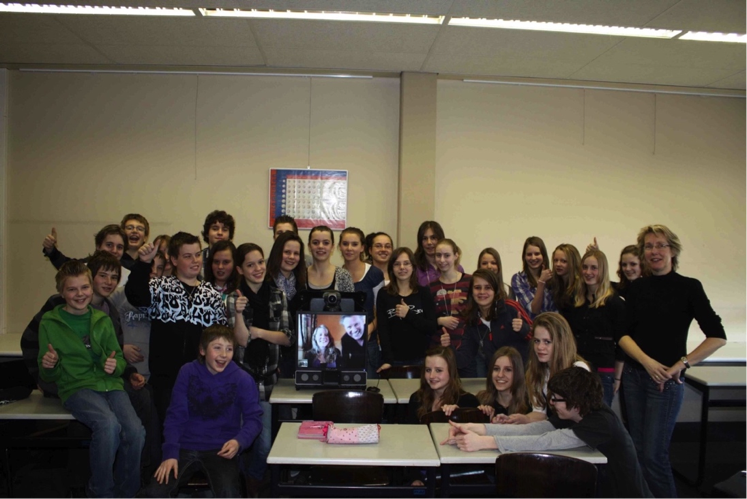 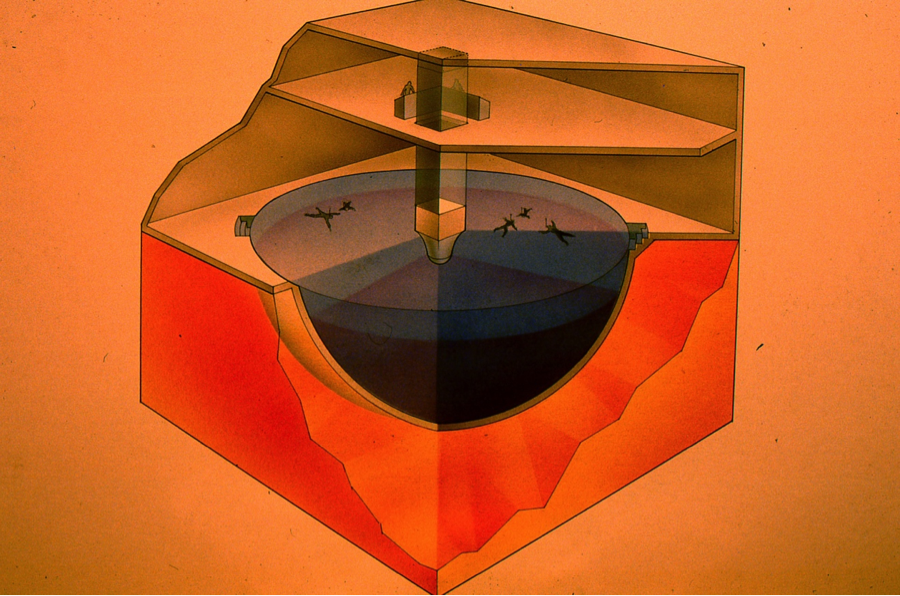 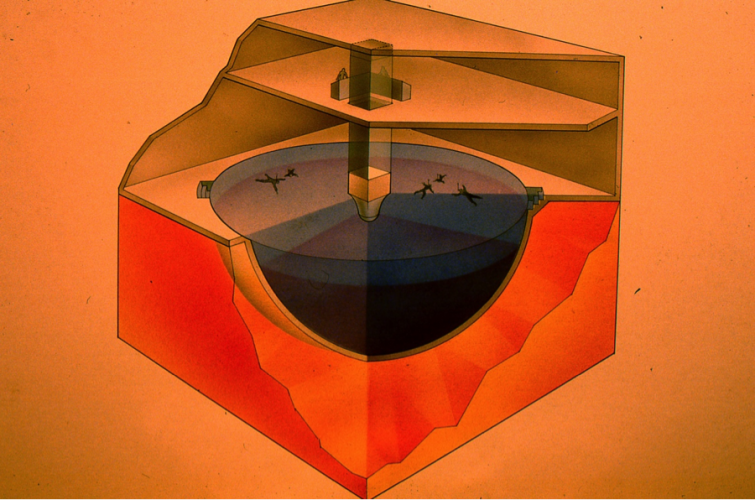 I have been involved in the space art community for 25 years with the artistic aim of exploring the relationship between our perceptions of the environment and how we conceptualize it as a world view. In the early stages I experiemented with panoramic photographs which I wanted to have shot in space and later developed a technology similar to todays Quicktime VR/Google Styreetview that displayed panoramic imagery to viewers wearing virtual reality Head Mounted Displays and at SIGGRAPH 1990 I demonstrated a version called Videosphere with VR pioneer Jaron Lanier. In 1993 with the the help of Gord Harris of the IMAX corporation I conducted a test using a 2 meter wide screen in a pool to demonstrate that movies can be projected underwater onto the inside of domes. As part of the experiment I entered the pool with a diving mask and found that seeing the earth in this new way to be a very powerful experience. In 2004 I was a speaker at the 8th Space Art conference held at the European Space Agency in Nordwick, Netherlands and in 2009-2010 was an artist in residence at the same facility invited to demonstrate the core underwater video technology.

I developed the core underwater cinema technology in 2010 when I was an artist in residence at the European Space Agency’s technology research centre in Noordwijk (ESA), Netherlands http://www.esa.int/esaMI/ESTEC/index.html where I tested and built 2 versions of the underwater theatre. The project was showcased on Discovery Channel in 2010 and represents 25 years of work experimenting and building various technologies to exhibit the concept. With the completion of the physical task of building the core display technology (thanks to the European Space Agency) I wish to focus on the creation of an interactive element, imagery and an exhibition at V2.

The core concept behind the project is the realization of a way to de-contextualize video imagery for viewers so that they can view the image in a new way. By immersing the participant underwater in a weightless state people loose their sensation of a local environment and “feel” the work in a new and unique way. Everyone who participated in the tests we did at ESA commented on the realism of the experience and experienced the sensation astronauts have called the”Overview Effect”. As part of my research at ESA I contacted astonaut Frank Mitchell (Apollo 14) who was the 6th person to walk on the moon and talkedabout how it has proven quite difficult to communicate more than just a portion of this potentially revolutionary experience to people. LIBERATION is a project which will overcome this physical barrier by providing people with a convincing, weightless simulation of this experience.

“For V2 the project LIBERATION is a next step in the research and understanding of Bodily perception in general and in media environments, or variable gravitational environments specifically. This research lines up with the Unstable Media practices that V2 has been developing over the last 20 years in the domain of the arts but always within an interdisciplinary setting. The project of Graham Smith will be a major contribution to this as it brings together a perfect match of theoretical issues and direct experiences around perception and Media environments”.
Alex Adriaansens – Director V2
The world would be a better place if every person could spend an hour space-walking above the earth’s surface to experience for themselves the world as it truly is, a fragile beautiful sphere spinning through the vastness of space. We still live on an earth that seems flat because that is how we physically experience it in our everyday lives. It is how we express it as we see the sun rising in the east, moving across the sky and finally setting in the west.  Only the few people who have actually been in space, those that have felt for themselves the so called Overview Effect, understand and perceive the world in this wholly new way. The majority of humanity though never truly comprehends this reality due to our inability to easily break the bonds of gravity and propel our bodies into space to experience first hand the world as an interconnected whole.
“Liberation” is a space art project which re-creates the Overview Effect for people by enabling them to experience a weightless simulation of floating in space and traveling around the earth. It is an underwater movie theater (Submersive Cinema) which is constructed in a swimming pool and projects imagery onto a 7 meter wide, bowl shaped screen which is situated underwater. The 35mm movie projector, held by a mechanical arm which is situated over the center of the screen, is pointing straight down. From 1 meter underwater, in a waterproof housing, a 120 degree image of the earth from orbit is projected onto the underwater screen. 6 people at a time equipped with scuba masks, snorkels and neutral buoyancy vests immerse themselves within the pool to experience what astronauts call the Overview Effect for themselves. In addition a railing running around the edge of the pool allows an additional 50 audience members to gain a sense of the experience without getting wet. The ultimate goal is the placement of a high resolution video camera with a panoramic lens on the space station or a satellite which will continuously transmit a live world-view from orbit.
I have been working on the “Liberation” project since 1982 taking panoramic photographs which I wanted to have shot in space. I developed a technology that displays panoramic imagery to viewers wearing virtual reality Head Mounted Displays and at SIGGRAPH 1990 in Dallas I demonstrated a version called Videosphere with VR pioneer Jaron Lanier. With the the help of the IMAX corporation in 1993 I conducted a test using a 2 meter wide screen in a pool to demonstrate that movies can be projected underwater onto the inside of domes. As part of the experiment I entered the pool with a diving mask and found that seeing the earth in this new way to be a very powerful experience.
I am currently experimenting with different ways to create the imagery for the project by combining satellite databases such as the Geosphere project by space artist pioneer Tom van Sant with computer graphics clouds. Another approach I am researching is the use of an optical printer to re film enlarged, still images of the earth to simulate a movie of the earth from orbit. Recently, space science researchers from Canada’s York University have expressed an interest in using Submersive Cinema to perform studies into human perceptual cues while weightless.
At the dawn of the 21st century the human race is finally beginning to understand how physically connected we all are. To move forward as a species we must overcome the differences which separate us and act as one planet. LIBERATION is an artwork that will help people understand this ideal and allow them to see their world in a new way. 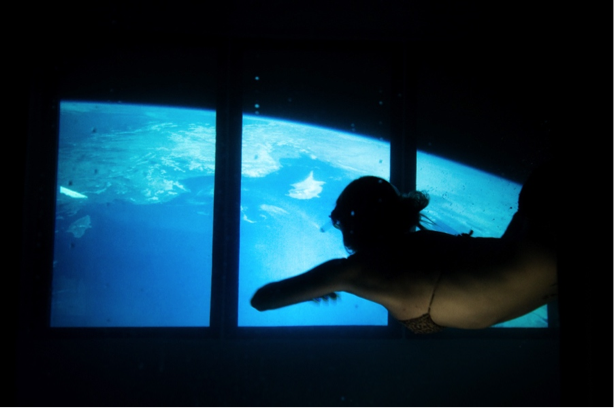 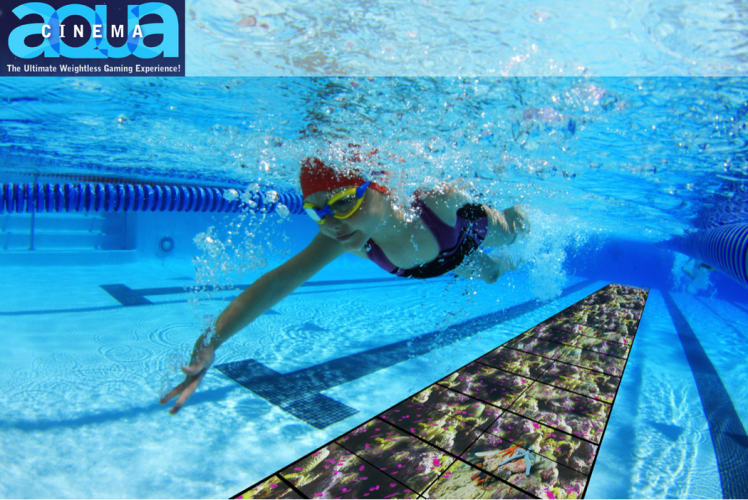 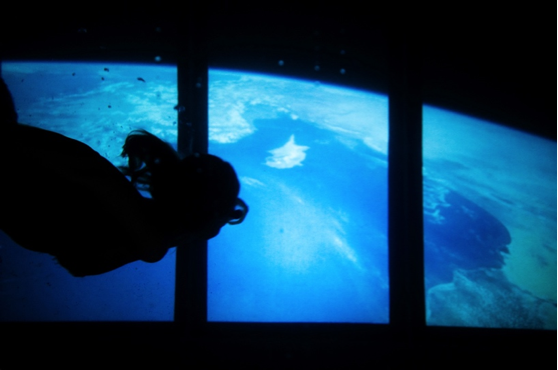 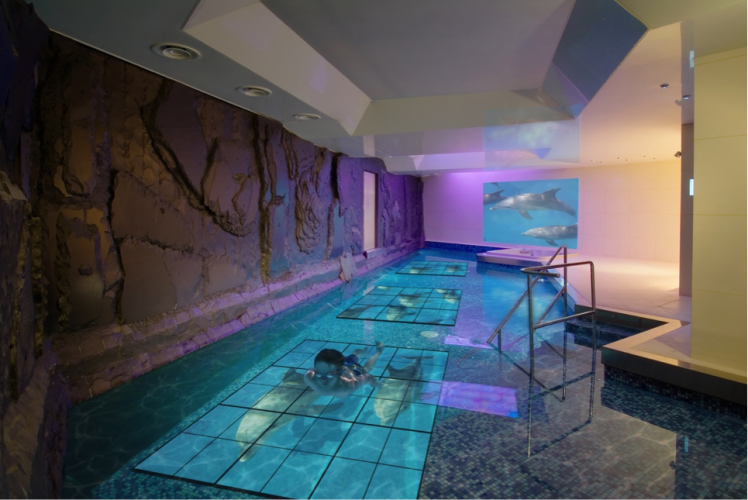 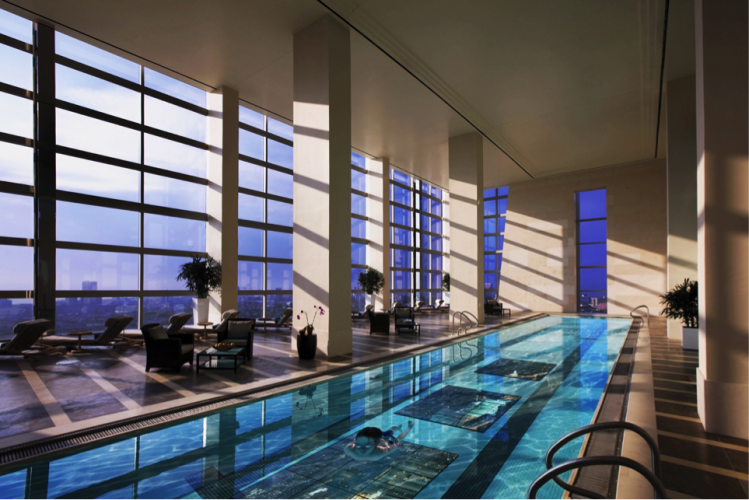 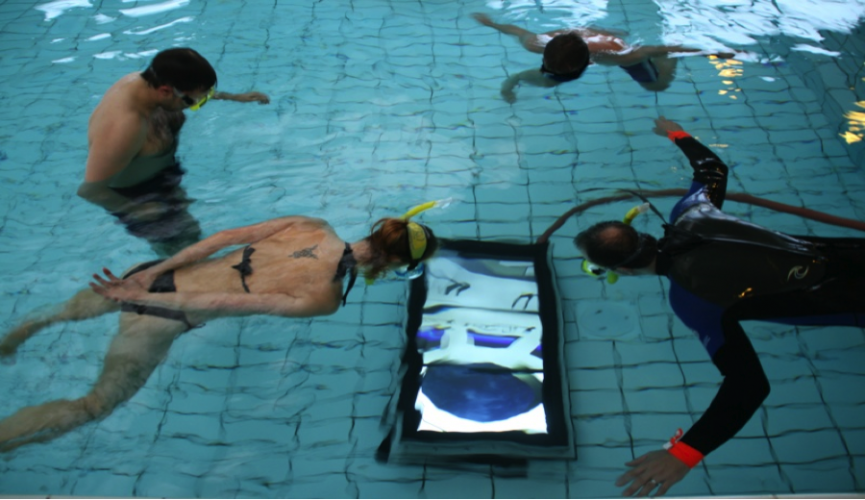 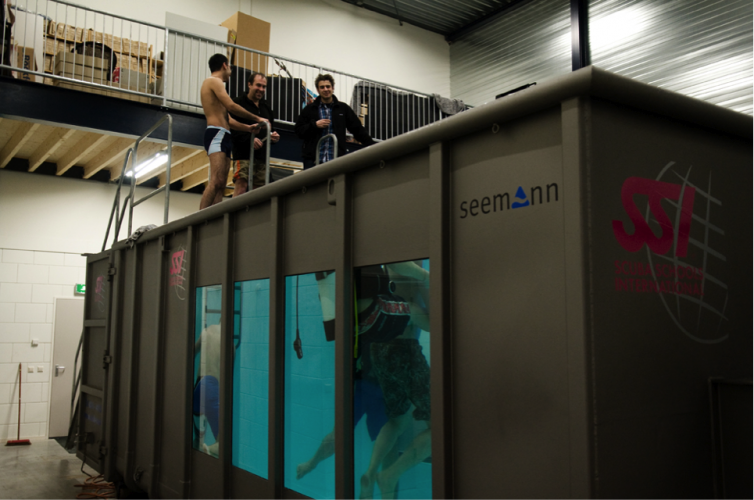