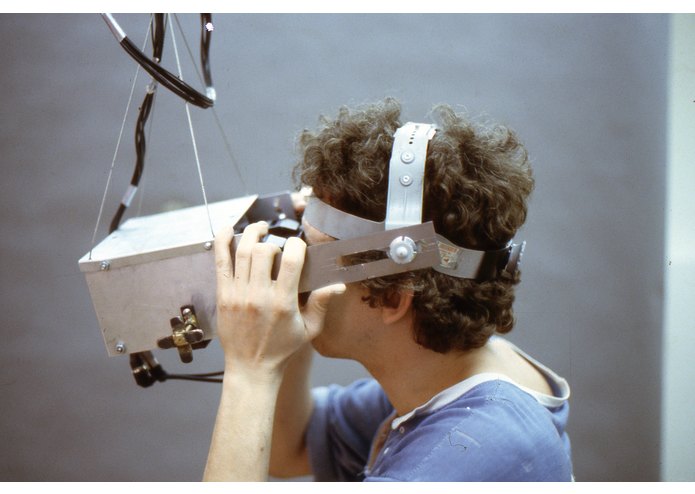 “Sensing Presence” is a project to restore 3 early media artworks which are historically significant because they were the world’s 1st art installation that used a Head Mounted Display (1983 Displaced Perspective), the 1st telepresence robotic sculpture (1986 Displaced Perspectives) and the 1st virtual reality panoramic video exhibition (1989 Videosphere). The second part of the project involves the construct of 2.0 versions of these early works using current technology to create an exhibition that explores both the historical roots as well as the future potential of virtual artistic expression.

As an artist I have been exhibiting artworks using virtual reality, telepresence robotics and video panoramic imaging since the early 1980’s and have been credited with exhibiting the world’s first artworks in these fields. This project will restore the early works and create updated versions using current technology. It is a project close to my heart as these works were exhibited at the very start of my artistic career and now 33 years later I feel I have developed a unique perspective on where these new media evolved from, the impact they have had on society and where they will have in the future.

“Sensing Presence” is a project that recreates the world’s first Head Mounted Display (HMD) virtual reality and telepresence robotic artwork that I created between 1983 -1989 in an exhibit that will feature both the original works as well as new versions based on the original ideas but using 21st century technology. These early VR and telepresence works are regarded historically as the world’s first artworks using HMD’s, telepresence robots and panoramic imagery in virtual reality environments and when displayed beside the updated 2.0 versions of each piece will provide the audience with a historical reference in regards to current projects now being created around the world.

As part of my graduation exhibition at the Ontario College of Art I displayed what the worlds first head mounted display artwork called displaced perspective. This piece used a camera and custom-built pair of video glasses that held two small black and white TVs in them suspended via counterweights from a movable boom on the ceiling. When the viewer put on the video glasses they saw themselves from a different perspective 2 m away looking back at themselves with the video glasses on providing them with me Remote perspective of their on body image and kinesthetic. As well as second camera perspective had been set up Camera witch and Displayed a prerecorded version of the scene with people moving through looking around which created strange déjà vu kind of feeling the viewers as they did not know what was real and what was Live. People you thought or which created powerful since station of telepresence and the new perspective on what perspective was.

1989 – VIDEOSPHERE
SIGGRAPH exhibition in Las Vegas
Virtual reality panoramic video artwork using panoramic imagery
L panoramic imaging artworks using custom-built camera rigs that I invented and I displayed these internationally in North America and Europe. My panoramic film frame to frame was one of these projects that was shot in 1986 and continues to this day. Nano spear the Project developed with the help of the National research Council was another project to load for the sensation of scale and presents to play with artwork. My series funny farm what you showed only adapted interactive microfiche and was another piece of wood displayed Montréal in 1992 and this is a showed using an early form hello display later became somewhere to Google Street viewmater in the 1980s I developed a series of

1983 as part of my graduation exhibition at the Ontario College of Art I displayed what the worlds first head mounted display artwork called displaced perspective. This piece used a camera and custom-built parros video glasses that held two small black and white TVs in them suspended via counterweights from a movable boom on the ceiling. When the viewer put on the video glasses they saw themselves from a different perspective 2 m away looking back at themselves with the video glasses on providing them with me Remote perspective of their on body image and kinesthetic. As well as second camera perspective had been set up Camera witch and Displayed a prerecorded version of the scene with people moving through looking around which created strange déjà vu kind of feeling the viewers as they did not know what was real and what was Live. People you thought or which created powerful since station of telepresence and the new perspective on what perspective was.

This is a new artwork called DISPLACED PERSPECTIVE the NANOCOPTER that will allow an audience the ability to shrink their perspective and literally enter into the 360 degree world of the microscope like a character in the film “Fantastic Voyage”. This transformation is designed to alter people’s perception as to the nature of the world around them and to extend our understanding of the Nano scale ecosystem that envelopes us but of which we are oblivious. By creating an experience which allows people the ability to physically enter into the microscopic world in a 360 degree panoramic VR type environment, NANOCOPTER will result in an artwork that pushes both esthetic as well as technical boundaries and open up a new frontier of artistic potential.

Our ability to see and explore the world around us is critical in providing us with a perspective on our environment and gives us the ability to comprehend the interactions that surround us. When viewing the microscopic world through microscopes we are given a window into his world but only from the perspective of looking down on it as if from a aircraft or satellite. We can’t truly enter the world of the ant or grass, to see it from that scale and move within that environment rather than simply observing it from above or through the video eye of an Endecsope type probe. Our ability to fully understand and relate to the microscopic world that surrounds and defines us, is limited by this inability to see and interact with it in a natural and human way. The Nanocopter project is designed to help overcome this issue and for the first time “shrink” people down to a microscopic level using VR display systems like Oculus Rift and my own invention of the world’s first microscopic panoramic camera.

HISTORY OF THE PROJECT
The history of my artwork that uses virtual reality Head Mounted Displays (HMD) and panoramic imaging systems like Google Streetview dates back to the early 1980’s and were the world’s first artworks to use of such display technologies. In 1983 as my graduation project at the Ontario College of Art I displayed the world’s first HMD based artwork called DISPLACED PERSPECTIVE which used a custom built HMD which I fabricated from 2 small camera eyepieces linked to a live camera. In the installation the viewer wore the HMD and saw themselves from a live perspective of 2 meters away. The second eyepiece in the HMD displayed the same image perspective but was pre-recorded which created a complex experience for the viewer as it was not obvious what or who in the image was real or recorded. The kinesthetic feeling of seeing yourself live from a different viewpoint was very powerful and

In the mid 1980’s I developed a panoramic imaging system which recorded the entire 360 degree by 180 degree image sphere which displayed all possible perspectives in one image made up of 432 separately shot images. I displayed these images in numerous exhibitions in Canada and Europe and also found that I could cut the images into gore like strips and place them onto a physical globe which undistorted the image back into a conventional perspective. Looking at the top of the sphere recreated a view of looking straight up and the 360 degree circumference was a horizontal panning perspective.

In the late 1980’s I experimented with a system that used a mirrored half sphere to act as a lens to record motion panoramic imagery for an early virtual reality headset system.

This worked very well and numerous companies now use this concept to record imagery with various versions available such as ????.com. As part of these experiments I used a tiny mirrored ball bearing that I had vapor coated with a mirrored reflective coating to create a very small mirrored sphere like the larger nes I first tested.

I then placed the 1mm mirrored sphere on the end of a pin and placed it onto a slide tray and positioned a microscope overhead. I shot a series of images with various types of very small scale objects in the slide tray and photographed the sphere so that using the microscope it would fill the image field of view. The resulting images created microscopic scale panoramic images that took in the full 360 degree environments. My idea back in 1989 was to  then use computer algorithms to unwrap the images and display them to people using head mounted displays but this proved impossible at that time due to the limitations of the computers available then as well as my lack of computer programing skills.

With the exponential increase in computer power, availability of low cost HMD’s like Oculus Rift and the development of panoramic software that is capable of transforming spherical imagery in real time my early experiment 26 years ago has become possible for the first time. My proposal is for a piece called NANOCOPTER in which people can sit in a chair, put on an HMD and suddenly become immersed within the world of the nano as a live panoramic eye. By looking around people can see the tiny creatures that inhabit this environment from their perspective and move around within it by using a joystick to control the slide specimen tray. In many ways it will be similar to actually taking a “FANTASTIC VOYAGE” as due to the live nature of the imagery and interactive capabilities of the system people will for the first time experience Nano scale life forms as if they were human sized. This shift in perspective will give the users a new outlook on the world and transform their understanding of the invisible world that surrounds us.