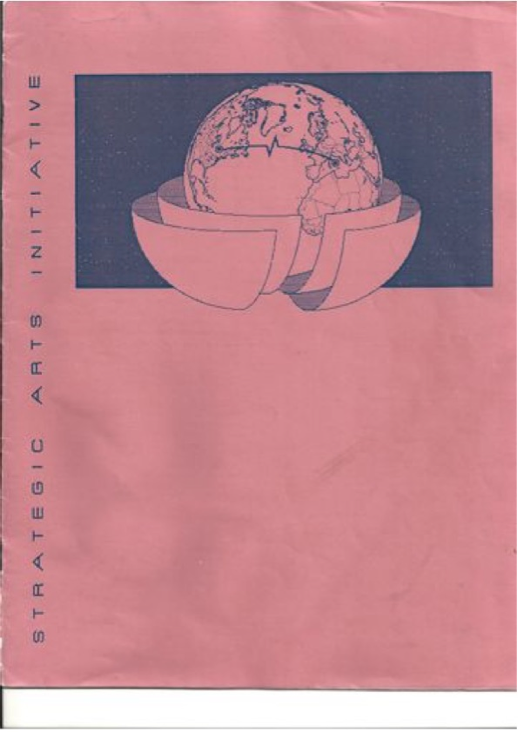 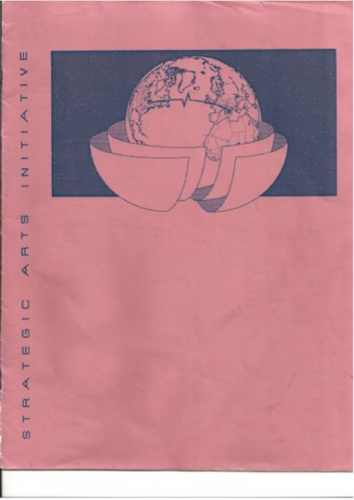 The Strategic Arts Initiative (SAI) is a Canadian answer to the U.S. Strategic Defense Initiative. Its purpose is to show the relevance of the arts in the world’s communication ecology. Communications technologies are putting us in touch with the whole planet, but most of us are not aware of how this situation can change our sensibility. We are all trapped in an invisible mesh of electronic talk. We still use communications to transport information. We have not yet understood that the new technologies are also transforming relationships. One of the roles of the artist in this context is to reveal these relationships.

The inspiration for SAI came from the late Marshall McLuhan whose work and particularly his theme of the “global village”, prompted a few artists in Europe and the US to explore the esthetic possibilities implicit in ordinary media such as the telephone, radio, TV, video and telematics. After E.A.T. (Experiments in Art and Technology, at the New York Museum of Modern Art. 1968) The idea seems to have abated in the U.S. during the seventies. A new impetus to create an international movement came from the initiative of Mario Costa in Italy, Fred Forest in France and Horacio Zabala in Argentina. Together they issued the first “Manifeste pour une esthétique de la communication” at Mercato San Severino, Oct 29th 1983. Since that time there have been several international colloquia to bring together artists and theoreticians to give shape and meaning to the activities.

The present occasion is Art Media II, an international colloquium on Communication and Arts, to be held in Salerno (Italy), May 27-30) under the direction of Mario Cost, professor and art critic at the University of Salerno. The theme is Art and Planetary Communication. This event includes a participation from the Future Theatre of Expo 86 in Vancouver which is dedicated to the theme of “Communications and Transportation”. The first colloquium in this series, art Media I, on Arts et communications occurred in Paris (La Sorbonne, October 1985) under the direction of Robert Allezaud. A third one, Art Media III, should take place in Toronto in October 1987, under the direction of Derrick de Kerckhove. Other colloquia on related themes involving artist, media and art critics, academia and the general public have been held in Toronto (Computer/Culture 1979-81), Villeneuve-lez-Avigon (Informatique/Culture, 1983), Tel Aviv (Artcom, October, 1984), Paris (Electra, December, 1984), Salerno (Artmedia, May 1985) and gain Paris (Recontres et Performances sur l’esthetique de la communication, Beaux-Arts, January, 1986).

So Far, the Canadian participation in these events and in the ongoing international investigation into the relevance of the arts to communications has been very good and well recognized. Thanks to the efforts of such artists as Norman White (Hearsay project 1985), Robert Adrain X (I.P. Sharp network – since 1977), Lisa Sellyeh (pARTiciFAX, October 1984), Bill Bartlett (i>P. Sharp and slow-scan TV), Glenn Howarth (Telidon Show, 1983 Sao Paolo Biennale), Herve Ficher (Marcro Polo project 1984-85), and the ongoing support of theorists and administratots such as Richard Hill Photo/Electric Arts Foundation), Tom Sherman (Media Arts, Canada Council), Derek Dowden (Cultural Software, Semiotica/Simulacra, April 1984) and Derrick de Kerkhove, (McLuhan Program Seminars on Communication in Art), the Canadian profile is high and has been dubbed as “the light from the North”. Canada has acquired an international reputation for expertise in communications and it is once again demonstrated by the thematic choice of Expo 1986.

There are no hard fast rules about how to fit in the SAI ideology. The artists are joined by a common interest in communication media and their artistic possibilities. All the work so far is based on performances. Though all involve technological installations, some performances are punctual, such as the work of Hamfelt/Kikauka, Rokeby, Smith and Back/White: while others are on-going processes inviting a random audience participation over a period of time (Merinat/Scher and A-line). Whether punctual or on-going, almost all these performances require the involvement of an anonymous audience. This is very important as the works are open and interactive in nature. The intent is to create relationships and these relationships are available to anyone who cares to enter them. Another important feature is that all performances involve action-at-a distance rather than localized events. This is the ‘planetary” dimension of the new artform.

At a deeper level, these performances do not generally stress content and information but effects and sensibility change. The audience is their content. This is the main source of their esthetic value. Other than sensations, feelings and emotions, these communication artist are not very concerned about communicating anything in particular.

Two of the performances stress auditory and tactile sensations across vast distances. To feel a physical pressure through the telephone lines in Back/White Telephonic Arm Wrestling performance is a novel and unsettling sensation which underscores the real proximity and intimacy the telephone has given us since it began. There is an immediate sensuality to David Rokeby’s body of communication by sound which can be felt almost intimately at 6000 Kms distance.

Merinat/Scher and A-Line’s performances complement each other. Both elicit random responses from an anonymous audience, but the first is purposely “artistic” and assumedly “high-brow”, while the other is spontaneous. The first uses radio, a broadcast system, while the other uses the telephone, a person-to-person communication system. Both performances give voices to indeterminate numbers of people who are given a chance to communicate in ways unknown before.

Smith’s performance highlights the fact that we are now extending our eyes and our minds technically across huge distances. Smith’s work is a new kind of closed-circuit TV, a way of making television’s power, a personal power, not only because it gives us a real-time personal vision on a distant object, but also because we can guide our “eye in space”, just as surely as Space remote control systems.

There is more than a touch of humor in most, if not all of the performances, and this humor is stressed in Hamfelt/Kikauka in their attempt to parody the poor man’s communication system., with the sophisticated means of present-day technology. The humor reacts against the deadlock of technology and introduces play where work only has been considered by the technocrats.

If communication has a future, it better be fun. Technology is not sacred. It’s merely functional. The whole world is under its gun. When we are through with the Telephonic Armwrestling performance, we plan to send the device to Ronald Regan and Mikhail Gorbachev. It might save us from the red telephone.